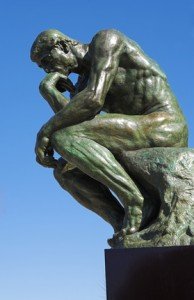 Had a great trip to Chicago for the Nike China Think Tank. I was amazed to learn just how many people there are in China – 1.341 billion vs. the US at 310 million – and how many Chinese play basketball – 345,000,000. Yes, you read that correctly – there are 345 million people playing basketball in China. That is more than the total population of the United States!

The top 10,000 – just a fraction of the entire number of players – are the elite players, referred to as “playing with a whistle.” Their games are organized and officiated. Everybody else – the vast majority of players – play just for fun and enjoyment. There are lots of one on one, two on two, three on three games and not so many five on five games.

The meeting was tremendous. The participants were authentic in their desire to help.

How to Face Big Challenges (like Nike in China)

1. Give yourself some time.
Five to ten minutes before you begin to think about the problem.

2. Get away from your usual place of work.
Shift your way of thinking.

3. Set yourself a target number of new ideas.
Five is the minimum.

5. Ask yourself some powerful creative questions. This will open things up. Here are some of my favorites:

6. Start shaping a solution.
Take the best idea or ideas and start planning how you’re going to do what you’ve decided to do.

Note: This was quoted (mostly) and paraphrased (partly) from a post by Michael Bungay Stanier of boxofcrayons.biz via George Raveling.

Besop’s Thought
I have been a fan of Aesop’s Fables for many years. As a result, I developed Besop’s Thoughts as they relate to basketball.

Moral of Besop’s Thought: Do not wish to follow in the footsteps of the great coaches. However, seek what they sought in your own way.