Class and Character Win the State

Home/Coaching, Motivate, Philosophy/Class and Character Win the State
Previous Next

Class and Character Win the State 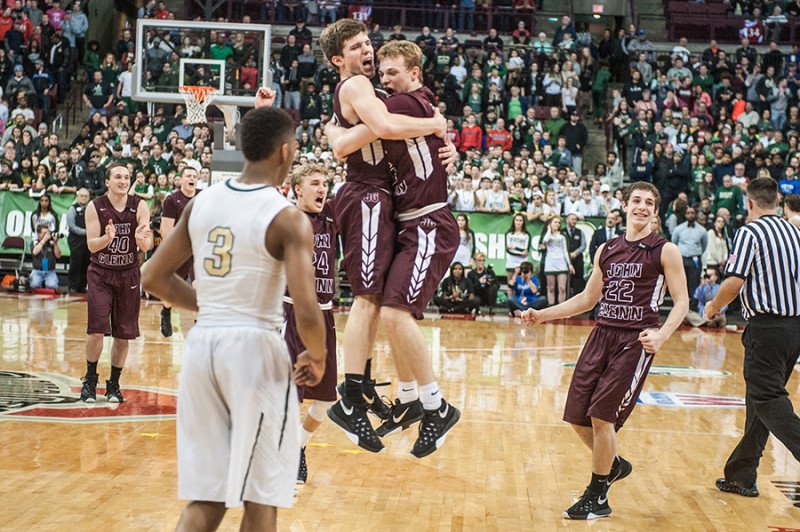 With that win, the team headed to Columbus this week for the semi-finals and, hopefully, the finals.

And they did it! This poised, balanced Muskie team beat LeBron James’ alma mater, a 13-time veteran of state final appearances, 76-72 and is now the Division II Ohio Boys Basketball State Champion.

Winning a state championship is the dream of all high school players and coaches. Of course for a team like the Fighting Irish of Akron St. Vincent-St. Mary High School (STVM), who has been there 13 times, it might be a little ho-hum. They have won it all 6 times and it might even be expected every year.

I don’t know how many people in attendance at Ohio State’s Schottenstein Center noticed that after the game, and after the Irish had accepted their runner up trophy, STVM Coach Dru Joyce had his players stay and sit on the bench as the New Concord John Glenn Muskies were honored and received their championship trophy. It is little things like that that will have STVM back in the state finals really soon.

The John Glenn players and coaches exuded class and character all season. Their 28-1 season was won with humility and they got along with each other as well as any team I’ve ever seen — at any level.

John Glenn had the biggest crowds for both the semi-finals and the finals: over 11,000 were in the arena on Thursday and nearly 15,000 on Saturday. Saturday’s audience was the biggest basketball crowd of the year for the Schottenstein, including all the Buckeye games!

Remarkably, this outpouring of support comes from a village population of 1,700 and a school district that serves just over 2,000 students K-12! I saw so many New Concord/John Glenn High School graduates in the stands that it looked like a school reunion!

I sat with my son Jay, class of ’85, and traveled to the game with dear friends Gary and Pegge Bradley, classes of ’48 and ’49. And of course my best friend Jennifer Lyle, from the class of ‘XX (she asked me not to mention which year!) was by my side.

Winning is not always on the scoreboard. But winning on the scoreboard seems to bring people together and to reconnect old friends. This special group of players and coaches has united the school, the village, the community and all of southeastern Ohio. Not by winning the state championship, but by winning it with class and character.

I have been accused of injuring my ankle by jumping on the Muskies basketball bandwagon this year! If I did, I am proud to do it. I stand tall and say with pride, “I jumped on and shared the ride of my life with a great group of townies.”

Congratulations, John Glenn High School Little Muskies, you have made us all very proud.

Thank you to the Ohio High School Athletic Association for its century of commitment to interscholastic athletics in Ohio.

‘Schottenstein’ is the Value City Arena at the Jerome Schottenstein Center at Ohio State University.

If you liked this post, please share it by using one of the buttons at the left. Be sure to sign up below for my free subscription list. You’ll get my blog posts by email and join a community of hungry coaches who want to be the best they can be. Thank you!

“For all coaches out there, this book is a must-read.”

“A treasure trove of inspiration; an amazing book by an amazing coach and man.”